Or Buy Bulk Powder Or Whole Bulk Ginseng Roots (Below) 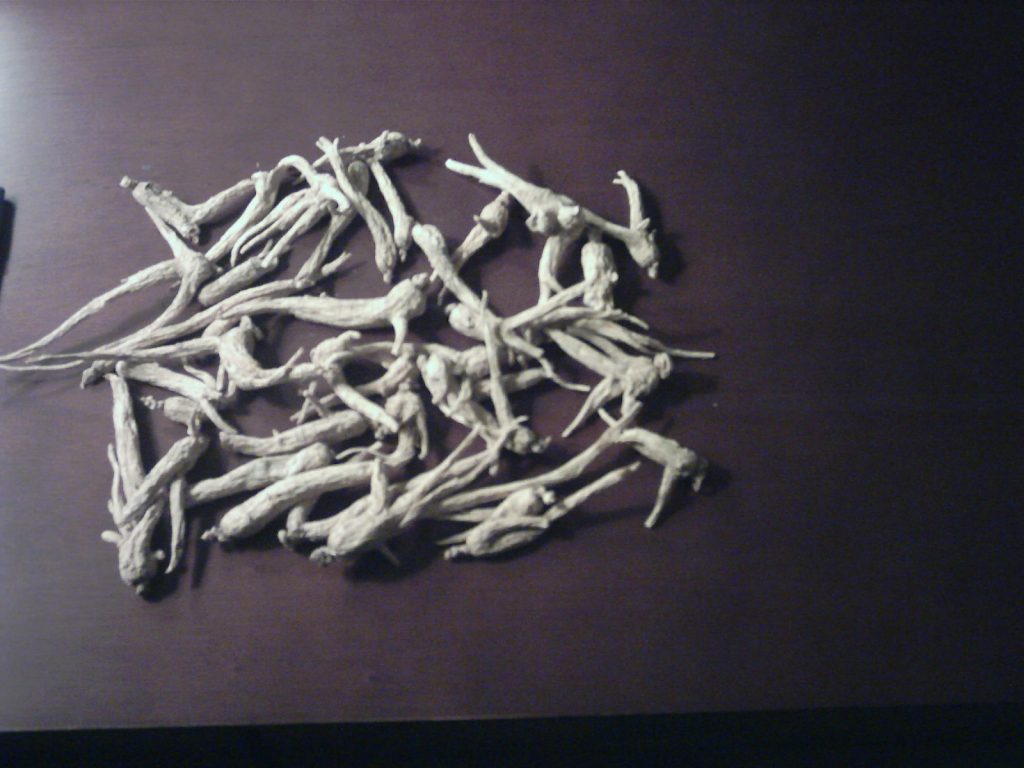 The Root Of The Matter now sells Certified Organic American Ginseng capsules!! Our bottles each contain 100 large “00” size capsules, that contain 650 mg. of pure american ginseng root powder in each capsule.
Facts about The Root Of The Matter! american ginseng: many companies who sell ginseng root powder use 2nd grade roots and “fiber” (the thin little tails that break off of the whole ginseng roots) because it is a lot cheaper to buy than whole 1st grade roots. We use only 100% whole 1st grade roots for our powder, the exact same roots as we sell. Also, we use 5 year old ginseng roots, which is older than most american ginseng roots are generally. Ginseng becomes more potent and effective the longer it is allowed to grow.
2) If an american ginseng is not certified organic, there is a high likelihood that it has been heavily sprayed with pesticides and herbicides because cultivated ginseng is so susceptible to fungus and disease. There is a joke among conventional (non-organic) ginseng growers that if you ever need pesticide but the store is not open, you can just melt down some non-organic american ginseng and use it for pesticide. Our certified organic ginseng does not have ANY pesiticides or herbicides or chemicals used on it at all.
3) When american ginseng is ground up using high speed milling machines, the heat that is produced from the friction of the hard ginseng roots hitting the blades at such high speeds can considerably heat up the ginseng and affect the quality of the ginseng powder. We have seen ginseng powders that are almost like cooked ginseng after they go through the high speed milling process. Our ginseng is milled by a slow speed milling machine that is specially made for minimizing the “heat rise”. It keeps the ginseng in as close to it’s natural, fresh, and aromatic state as possible. People comment on our american ginseng and say that it is “fresh”.
I Just wanted to let you know, “I Got MY ROOTS” I have to tell you that it was well worth the wait, the roots are just wonderful, thank you very much. I am afraid to stop it during cold/flu season. I have younger kids and our house has been infected with 2 rounds of strep and colds and I am the only one who has not become sick yet!!! I truly believe in the power of the almighty ginseng root!
Might I also mention that awhile ago I purchased some sliced roots from —— Ginseng Store. Their roots cannot hold a stick to your roots. The taste is very different and your roots have a great flavor. I can’t stop eating them!